578 NISSAN MAGNITES ON THE ROAD

578 NISSAN MAGNITES ON THE ROAD 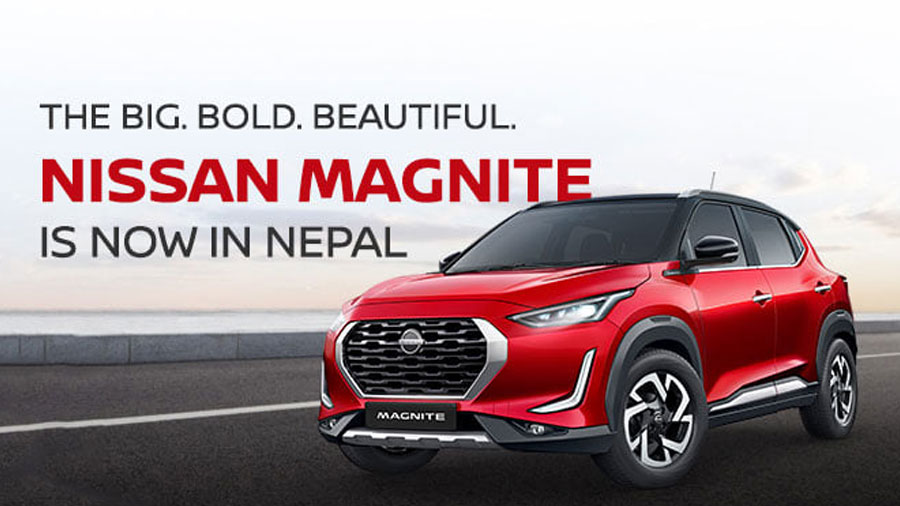 After an array of groundbreaking releases over years, has Nissan outdone itself again? With Nissan Magnite, it’s safe to say that it has!
A head-turner is what we like to call it. Forefront in performance, technology, style and safety, Nissan Magnite presents itself as a package. Magnite is not just any car, it is a Compact SUV that already has (very almost) dominated the Nepali vehicle market.

Nissan Magnite - In a Nutshell

The reason, why Nissan Magnite is so distinct from others of its kind, is that initially it was supposed to be launched through Datsun. And hence we get to witness the Datsun grille upfront. But by the time it was ready to be set in motion, it became a Nissan, which is why you have the Nissan badge on a Datsun grille.
The Times of India titled Nissan Magnite “a strong step towards redemption” and we very clearly DO NOT deny.
“Brilliantly designed, comfy and well-equipped at an incredible price; it’s the best compact SUV for the money.”

The design in Nissan Magnite doesn’t give an SUV feel, it gives a sporty feel.
Why we call it an eye-catcher is because of its large front grille, accompanied by small sleek headlamps which manage to catch attention at the first glance while on the road. This bigger appearance makes you question if it’s really not a sports vehicle. The car appears proportionate from the back, and the silver skid plate is what makes it stand out from the crowd.
You wouldn’t be surprised knowing that in terms of height and width, Magnite actually is one of the lowest in the segment. If you take your glance a little downwards and notice the wheels, the 16-inch alloy wheels give off a seemingly sporty vibe as well.
The essence of an SUV, however, is maintained by the ground clearance in Nissan Magnite of 205 mm. Not to forget the nice and long wheelbase, equating to its rival vehicles on the Nepali market.

Engine, Mileage and Performance: Measure The Power of Magnite

With Magnite, Nissan decides to stick with the petrol-only option. It comes with a powerful HRAO 1.0L Turbo Engine that is known to give the driver a feel of refined performance. With no known bump up or torque in power delivery, the smoothness is unquestionable.
The first-in-segment HRAO X-Tronic CVT is what helps Nissan Magnite deliver enough punch, enough roughness and enough smoothness in terms of drive. That is what makes it a go-to alternative for the city road or the highways. The motto: travel comfortably, travel quickly.
Nissan here claims 0-100 time of 11.7 seconds, also claiming the highest fuel efficiency in the segment of 17.7 kmpl. Impressive!! Did we mention its responsive gearbox is what makes it a great pick for whatever road you decide to hit with the Magnite? The responsiveness is there when you need it.
The transmission torque is kept to 152 Nm to keep up with the rough road ability. We know how roads here can be!! Talk about technology with thoughtfulness.

How does the Magnite feel from the inside?

The first thing that you will notice about the Magnite interior as you step in are the hexagonal AC vents which look surprisingly similar to what you would see in a Lamborghini. Don’t believe us? Look it up! The layered dashboard with the centre console tilted a little towards the driver just shows again how well-thought the entire design is.
The leather-wrapped steering wheel is also something you’ll notice right away. Looks like the sporty theme is here to stay!
With the richer cabin, leather-trimmed seats, supportive seating and other added feel-good factors, it’s safe to say the Nissan Magnite feels royal-ish from the inside as well. The wireless android auto and apple carplay connectivity to go with an 8-inch touchscreen system add to the list of all the advanced features Nissan Magnite has.
Even when it comes to internal storage, the Magnite has plenty! It is internally packaged extremely well and offers more than a comfortable second row of seats. The perfect companion for your trips.

When it comes to safety, Nissan Magnite is NOT here to play. You get dual front airbags, pre-tensioned seat belts, ABS with EBD, rear parking sensors, a seatbelt reminder alarm and what not. The higher-spec models and the “Turbo” models offer additional features like ISOFIX child-seat anchors, ESC, Hill Start Assist, Brake Assist, 360-degree camera, and TPMS.
Nissan Magnite received a 4-star rating in the recently concluded ASEAN NCAP crash tests. Which is a pretty great deal for a compact SUV. We’ll conclude by saying the safety is absolutely top-notch in the Nissan Magnite.
The first-in-segment 3600 around-view monitor is one new thing that separates Nissan Magnite from the crowd.

Practical, comfortable, well-equipped, majestic. That is the mood that revolves around the Nissan Magnite. The Magnite drives as good as it looks!
With its design, it is sure to turn a lot of heads while on the road. Coupled with the sheer amount of features that are way ahead of their time, buyers looking for a tough ride but with comfort and convenience could be swayed toward Nissan showrooms.
It is understandable how Nissan gathered more than 40,000 bookings for the Magnite within three months of its launch. We say, go for it!

Thank You for Downloading Brochure.